The labour force has seen an increase in the amount of people working multiple jobs in Canada. An increase in part-time or secondary work has been seen across many industries and age groups as the Canadian workforce continues to embrace moonlighting as an addition to full-time employment. Current statistics and upcoming changes in legislation indicate that it is likely that this pattern will continue and moonlighting become the new normal.

This addition of a second job could be for multiple reasons:
A worker could find part-time work to compliment their full-time employment or a worker may work multiple part-time jobs for a combined 40+ hours per week.

The chart below outlines the amount of hours worked by Canadian workers at multiple jobs each week: 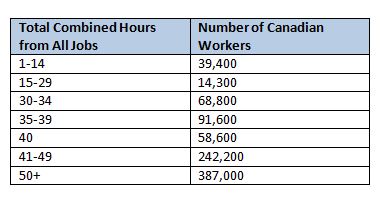 As per the chart above, the highest percentage of workers that have multiple jobs are working 50+ hours per week. This suggests that many Canadians are seeking a secondary job to increase the total amount of hours they work in one week to over the usual 40 hours that a full-time job offers.

There are many reasons that someone may supplement their income with additional work (not enough money, enjoyment, scheduling, etc) but as stated above, over one million Canadians are working at least one hour or more at a second job each week.

Not all of these people are working in addition to a full-time job. Many Canadians are working multiple part-time jobs to make ends meet.

There are many reasons that a worker may choose part-time work, including:

Whether someone is working a part-time and full-time job or multiple part-time jobs it is clear that the Canadian economy has reached a point where a sizable portion of the workforce is relying on multiple jobs to get by. Based on current statistics and upcoming changes in legislation it is likely that this pattern will continue and moonlighting become the new normal.

Labour force, employment and unemployment, levels and rates, by province